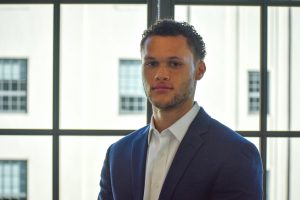 Adero Mandala is from Baltimore, MD and majored in Engineering with a minor in Psychology. He has been interested in civil and structural engineering for years! His elective classes, as well as his team’s Capstone projects, have allowed for him to explore these interests more deeply. Adero enjoyed the community that the Engineering major fostered. He shares, “We were encouraged to work together and we knew that we had to if we as a collective were going to succeed.” Adero conducted research between two brain activity measuring devices, electroencephalogram (EEG) and functional magnetic resonance imagining (fMRI), to help Dr. Barella make an informed decision on which device she should use to collect data for her research project. He collected his findings and wrote a literature review that communicated the pros and cons of each device.

During the summer between his sophomore and junior year, Adero was an Engineering Intern at STV Inc. Through his experience, he learned not only the ins and outs of the industry from the design side but also that he does not want to be locked down to a desk. That realization is why he is now interested in working for a general contractor. Between his junior and senior year, Adero was a Project Engineer Intern at Whiting-Turner Contracting Company. That summer, he experienced the construction side of the industry which  further confirmed that he enjoys working onsite or in the field. During his time at Wake Forest, Adero studied abroad in Sydney, Australia and was involved in a variety of clubs. He served as the Vice President of the Club Soccer Team and was a member of the Climbing Club as well as the Wake Forest Chapter of the National Society of Leadership and Success. After graduation, Adero will be joining Whiting-Turner Contracting Company as Project Engineer.