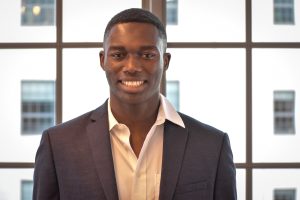 Aidan McCormack is an Engineering Major and Mathematics and Environmental Science double Minor from San Francisco, California. His favorite class at Wake Engineering was biomimicry. This class altered the way in which Aidan looked at the world by allowing him to appreciate the oldest form of design ever created, nature. “As life on this planet has gone through billions of years of iterations, it is apparent that organisms work the way they do for a reason. So it makes sense to look at nature for design inspiration.” Aidan had an “eye-opening” experience the summer after his freshman and sophomore year while he was doing research at Wake Downtown under Dr. Gross in chemical engineering. During his time doing research, his project was on processing nano- yttria-stabilized zirconia (YSZ) in solid oxide fuel cells to increase their thermochemical stability thus, rendering them more efficient. His team created cells using electrodes of varying compositions of graphite and YSZ sintered atop a YSZ electrolyte in different atmospheric conditions. In doing this, they were able to manipulate the nanoparticle size thus, increasing the surface area of the electrode. From this, they then infiltrated the electrode with catalysts to make the anode and the cathode. This was a pivotal experience for Aidan as it sparked his interests in energy engineering, a career path that he is currently still pursuing.

While at Wake, Aidan was the risk manager for the Alpha Sigma Phi fraternity. Aidan’s final semester at Wake consists of working as an Engineering Consultant for the Commonwealth Fusion Systems (CFS). His position is in optimization using modeling programs such as MATLAB, to minimize torsional stress from electromagnetic resonance and vibrations in the CFS fusion generator. Aidan will be continuing his work with CFS after graduation.