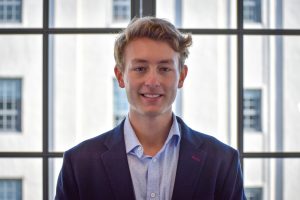 Cameron is from Hampstead, NC and majored in Engineering with a minor in Mathematics. Coming to Wake Forest, Cameron was undecided about what program to pursue. Although he was not set on engineering, his exposure to the program allowed for him to develop an interest for it, “Wake Engineering helped me learn about many different types of Engineering, which also helped me narrow down my passions. The flexibility of the program allowed me to study abroad which narrowed it down even further,” he shares. His favorite Wake Engineering memory was during his freshman year while in the full-scale prototype phase of the chair project. The week before it was due, Cameron was almost done cutting and connecting the cardboard and as he was finishing up, the prototype fell apart. This hiccup resulted in him spending more time frantically working on the project with other students late into the night on the day the project was due. He thinks fondly on the feelings of teamwork and dedication that he experienced that night.

Cameron has worked at Piedmont Environmental Alliance under Miller Coffey. Some of his accomplishments during the internship included creating an energy audit tool for local businesses to easily assess their energy usage and recommendations for increasing energy efficiency. He also helped to create an automated energy audit tool for homes that provided instant recommendations for homeowners. While studying abroad in London, Cameron interned with an environmental impact start-up company called Ocean Bottle. “The experience instilled a passion for sustainability in me. I liked it so much that I am continuing with environmental engineering in graduate school,” he shares. Outside of the classroom, Cameron was involved in a variety of extracurricular activities. He served as a HOPE KidsFest Hospitality Chair, Circle K member, Math Counts volunteer, and a Habitat for Humanity volunteer. Cameron will be attending graduate school at Duke University to obtain a Master’s in Environmental Engineering.