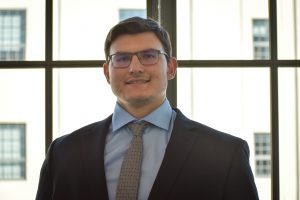 Goran Jovanovic is from Ashburn, VA and majored in Engineering with Math and Computer Science double minors. Goran initially began his engineering journey with the intent of being a computer engineer or data engineer but, after spending time in those classes he came to the realization that it wasn’t something that he wanted to do full time. Goran is a part of the Wake Forest University Football team, as such he has been accustomed to the idea of a team and working with others. This experience has helped him realize that he wants to go out into the world and build connections with like-minded people who work in the construction industry. Similarly, Goran’s favorite memory is getting to experience and learn about his fellow peers in the program. The time spent with his peers has been beneficial in building a strong sense of community.

Goran’s favorite Engineering project is the Capstone project he is currently working on which is centered around Habitat for Humanity. His team has been working closely with stakeholders from Habitat for Humanity to develop new home designs that can be used on lots in Forsyth county. This project is his favorite because of its relevance to his post-graduation plan and it has proven very beneficial for his growth in the construction field. Goran’s passions are civil engineering and construction. He has always had a fascination with construction since his childhood, and would spend a lot of time making creations of his own while growing up. He loves learning about the process of construction and all the steps necessary to go from an idea to a finished product. To him, there is nothing more satisfying than seeing an idea at its foundation grow into a finished product. After graduation, Goran will be joining Winter Construction in Atlanta, GA as a Project Engineer.