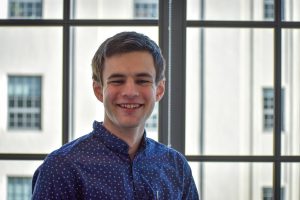 Henry Shaw is from Oakland, California and has a particular interest in mechanical, electrical, and nuclear power engineering. His interests were primarily fostered through the engineering courses that he took. The engineering course ERG 212: Transport Phenomena, as well as some electives, introduced Henry to mechanical engineering and allowed him to further explore the field. He was able to learn about topics such as stresses, material properties, statics, and dynamics. Through the course’s assigned primary research paper, Henry was able to take a deep dive into learning more about nuclear power, a topic which he had once had an interest in. He also shared that his favorite Wake Engineering memories are rooted in this course, specifically, in the class labs and learning about the various physical forces in the world. Additionally, Henry often reflects on the course ERG 311: Control Systems and Instrumentation, and how this course taught him about electrical engineering beyond the prerequisite of physics and his own real world experience.

Henry has worked as a Steamfield Engineering Intern at Calpine. There, he was able to use the skills he learned in ERG 212 and ERG 312: Computational Modeling in Engineering to construct a model of stream traveling through 40 square miles of pipes to ensure pressures, temperatures, and pipe integrity were within safe limits. Outside of the classroom, Henry played on the Wake Forest lacrosse team for two years. He was also a member of the climbing team for three years. After graduation, Hank will be joining Epic Engineering in Madison, Wisconsin as a Technical Solutions Engineer.