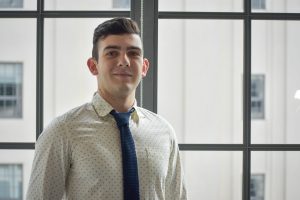 John Hobson is from Wake Forest, NC and is interested in the overall organization of projects, product design, and overcoming design challenges. Wake Engineering has fostered his development in all of these areas through various projects, especially his team’s Capstone project! This curiosity led John to work with Professor Gross on his Solid Oxide Fuel Cell (SOFC) project for two summers to prototype variations of the SOFC. During this project, John and his fellow research students would work on constructing the next iteration of SOFCs, testing them for their electrical efficiency, then cataloguing the results following Dr. Gross’s guidance. Functionally, they worked towards creating an electrode material with the highest internal surface area possible in order to have the most reactions occurring per unit volume. This higher efficiency ultimately results in being able to run the SOFC at a lower operating temperature, allowing for a wider range of applications. “Overall, I learned a lot about chemical engineering and the prototyping process in a lab setting, including how to carefully use a range of lab equipment and maintaining a lab in general” he shares.

John’s favorite Engineering class was Professor Henslee’s and Professor Luthy’s Systems and Instrumentation Class because these professors created an exciting and engaging atmosphere which pushed students in a productive manner. Outside of class, John has been in Reserve Officers Training Corps (ROTC) all four years of college. While ROTC is an enormous time commitment, he has enjoyed the high amounts of physical and leadership training. He has also been involved in photography club, a dance club, the board game club, and the WakerSpace where he led leatherworking workshops. After graduation, John will be commissioning as a 2nd Lieutenant in the Army’s Engineering Branch and hopes to become a combat engineer commander.