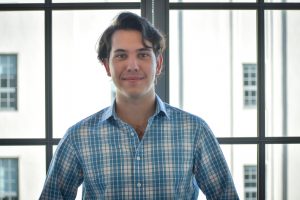 Luis Pons is from Leon, Mexico and majored in Engineering with a minor in Entrepreneurship. He has always sought to have an engineering mindset toward problems. Wake Engineering has helped cultivate that mindset by encouraging Luis to use various perspectives to think through a problem and to look for creative solutions that others might not see. “Especially in a world that is run by business mindsets, I believe that an engineering perspective would be very beneficial,” he shares. Luis has also always been interested in building and designing. He was able to work on and improve these skills through the variety of engineering projects that he has worked on.

Luis’s favorite Wake Engineering memory is the very first engineering class he took. He recalls how he was unable to attend the first official class and because of his absence, he had to introduce himself in front of the whole class. He is fond of this memory because he remembers how welcoming his classmates were. Luis’s favorite project was building a wooden bridge in Professor Lutzweigler’s elective class. He enjoyed testing out the bridges to see which team had built it better. Outside of class, Luis was involved in a variety of extracurricular activities where he was a member of the Club Golf team, worked for campus recreation as an attendant for the Center of Wellbeing, and was a member of the Sigma Alpha Epsilon Fraternity. Although Luis is currently unsure of his plans post-graduation, he hopes to use his experiences and Wake Engineering skills to guide his plans for the future.