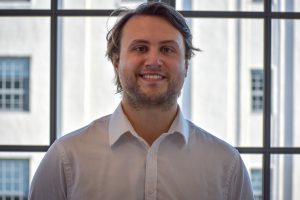 Nicholas Rucinski is from Cary, NC and majored in Engineering with a minor in German. Wake Engineering allowed him to explore topics of engineering that he was interested in while also “instilling a knowledge of basic engineering principles and practices. As a result, Nicholas has a broad interest within engineering. “At my core, I just love solving problems and thinking critically and I think this has been the best degree for that. Everyday, in every class I’ve taken, I am facing a new problem and determine the right approach to achieve a functional, successful solution. It’s like a puzzle and it really forces you to think not only creatively but innovative[ly] as well,” he shares. Nicholas’ ultimate goal is to leverage the technical knowledge he has gained at Wake Forest into a client facing position. He was recently commended on his ability to communicate with his team’s Capstone project stakeholders by the stakeholders themselves. Kenneth reflects that this experience has assured him that Wake Forest has taught him the necessary skills to be successful in his desired role.

Nicholas has worked at Lutzweiler PLLC as a Structural Engineering Intern. He worked with Professor Lutzweiler to develop design spreadsheets in Excel that could be used by beam members to recommend that certain design criteria and standards be met as outlined by state codes and regulations. Beam members would enter in their loads and the spreadsheet would compute which beams could safely support the load. Outside of engineering, Nicholas was involved in Kappa Alpha Order, served as an Engineering Teaching Assistant, and a Campaign volunteer. After graduation, Nick will be joining Epic Engineering in Madison, Wisconsin as a Solutions Engineer.