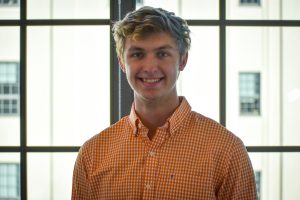 Noah Handwerk is from Clemmons, NC and majored in Engineering with double minors in Computer Science and Statistics. He is interested in the embedded systems, computer programming, and robotics aspect of programming. In particular, Noah enjoys programming systems and gathering data through sensors that he can then analyze and use to write programs. Noah’s interest in the field was further developed during the mobile robotics course he took fall semester of his senior year. The structure of the course allowed for him to further explore an area of interest while developing new knowledge along the way, specifically the ethics of artificial intelligence (AI). Additionally, the course encouraged Noah to try new things and to push himself, even if it meant failure. As a result, Noah was able to figure out more about what it is he wishes to do in the future.

Guided by Professor Lowman, Noah conducted research on the effects of flash droughts on vegetation productivity in the central United States. He primarily focused on data management, organization, and formatting through the Wake Forest Cluster. Noah also worked with Professor Luthy to help develop a drone and sensor network for monitoring forest fires. Outside of engineering, Noah took students on outdoor trips and adventures through the Outdoor Pursuits program at Wake Forest. He also worked at the rocking climbing wall at Reynolds Gym where he was tasked with teaching people how to climb and served as Vice President of Rock Climbing Club. After graduation, Noah hopes to attend graduate school or go into the workforce.