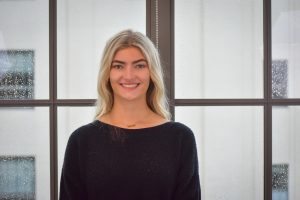 Sophie Ballou is from York, Maine and is interested in the overall process of creating things. “I’ve always loved making things and was most interested in math and science” says Sophie. In high school, she spent a lot of time in her school’s innovation center where she had the ability to 3D print and laser cut. The Wake Forest Engineering Department has allowed her to continue to grow in this aspect and build upon her previous highschool experiences through more advanced projects in her classes. Sophie’s favorite class in the Engineering program is Engineering 311 where she was able to pursue her interest in the creation process through many projects such as the power module project, the sensor module project, and the final project where the students decide what they want to build. One of the projects that stood out to her the most was the robot project with Dr. Henslee and Dr. Luthy in this class.

Throughout her time at Wake Forest, Sophie was involved in Greek life as a member of Wake Forest University’s Chi Omega Chapter of the National Panhellenic Conference. Sophie also worked in tech support at Wake’s The Bridge, a computer servicing station in the ZSR Library. Along with this, she was a technical engineer at the Amazon Web Services (AWS) data center, a data analyst for Fidelity Investments, and a sales engineer for SST Automation. Sophie’s post-graduation plans are to continue working at SST Automation in Los Angeles, California as a sales engineer.